Jim and I both g​rew up in Ohio and stayed there until we were in our early 20's, when we both moved away, but in different directions. We did not get together until our mid-20's in Atlanta, Georgia, and it's history from there.  Since Gayle's  Dad and his family still lived in the area, we went back on occasion to visit, the last time in 2012 on our way from Wisconsin to Kentucky when we went to work at Amazon.

​The last time we were in Ohio was for my Dad's funeral in 2014.  We made a trip to Kent State University where we went to college in the early 1970s. We toured the May 4 Memorial Museum, as we were both at Kent on May 4, 1970 when the National Guard shot four students during demonstrations. You can read all about it below.

​We also went to a park in the Kent area, where a group of Kent State students had a picture taken and we wanted to find the ledge where it took place.​
​ 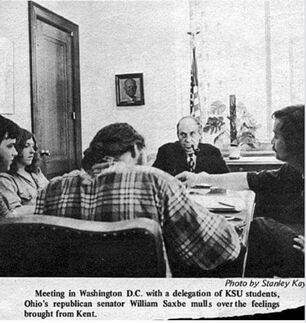 Above is a picture of Jim from we believe to be around May 1972 when he, Dustin Lacate, Denny Rein, and others went to Washington, D.C. to meet with Ohio Senator William Saxbe. They represented a delegation of Kent State students voicing their feelings about Nixo n's invasion of Cambodia. That is Jim with his back to the camera in the plaid shirt.

During our 2019 summer trip, we headed back through Ohio on our way back to Texas after leaving Maine.  We did a good bit of sightseeing, but there is so much more to see.